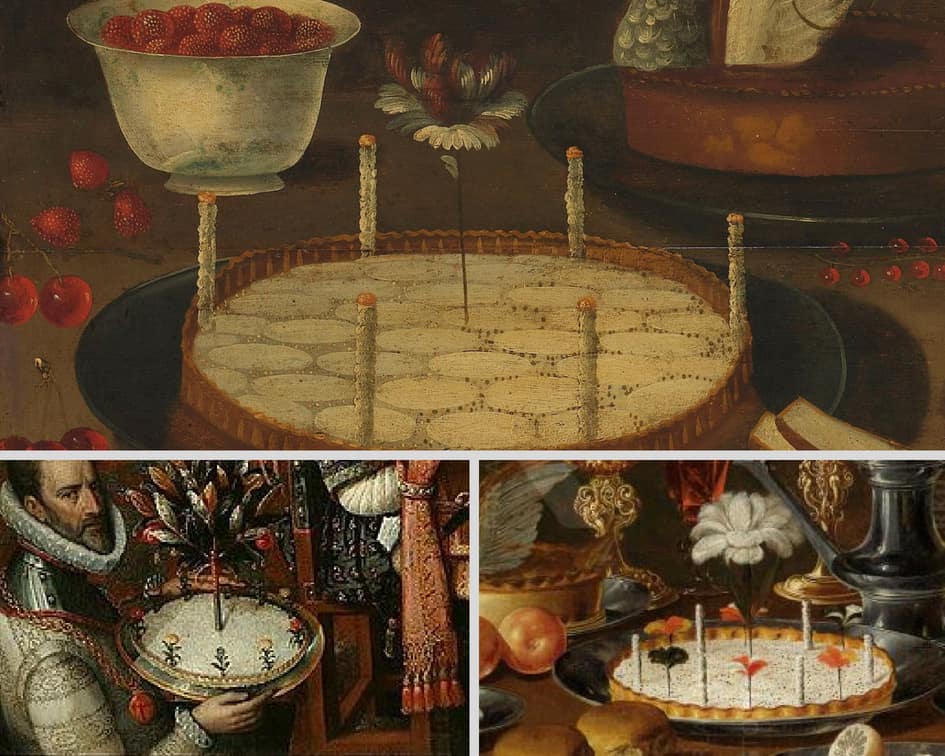 A few days ago I was at a birthday party where I had a piece of cake that had absolutely all the colours of the rainbow. The topping was a glazing packed with sugar, a feast for the eyes, but not so much for your teeth.

It seems that these decoration trends that transform cakes and pies into beautiful edible objects have emerged quite recently. All kinds of ingredients and techniques to make spectacular creations that are appealing to the eye and sweeten our palate.

Really? Your cake doesn´t have any colourful sugar paste, countless layers of frosting, chocolate or other sweet decorations? How boring.

As it happens, cake decoration is actually not a contemporary trend. Some of these decorations already existed during the 16th century, used for dishes that were served at meals to the rich and famous. Just imagine Philip II of Spain without his trendy cake during a royal banquet.

Today I want to show you a few examples that will not go unnoticed by the bakery and pastry fans amongst us, not even by the plain cake lovers like me.

There are some paintings with visual examples of tarts, that allow us to know how they may have looked like in real life, at least on the outside. I´m aware that we must make a difference between cake, pie and tart, and so on, but today we are focussing on the decorations themselves.

Some tarts were decorated with branches of bay leaves and flowers, others with little sticks made of sugar. Others were topped with rosemary sprigs and golden pendants, silk flowers or icing sugar drawings.

The most stunning example can be found on an anonymous painting from the end of the 16th century, representing a banquet with Charles V and members of his family and entourage. 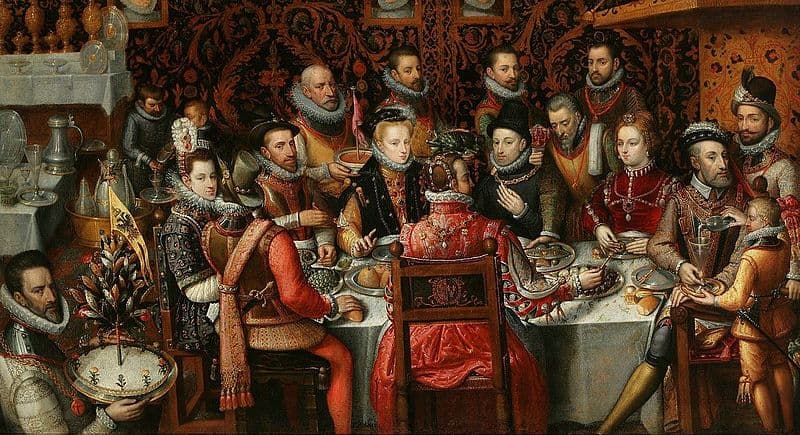 The servant on the lower left side brings a spectacular tart to the table with a great branch of gold and silver bay leaves, topped with a banner and crown to identify the most important dinner guest, Charles V, as The Holy Roman Emperor. At the back of the table another tart is being served, however clearly less important given the size, position and decorations.

A few decades later, at the beginning of the 17th century, the paintress Clara Peeters shows us a similar tart as leading actor of the scene, without any dinner guests at the table. This one is topped with a rosemary sprig that has little golden pendants hanging from it. The borders are decorated not only with smaller sprigs, but also with little silk and wire flowers. 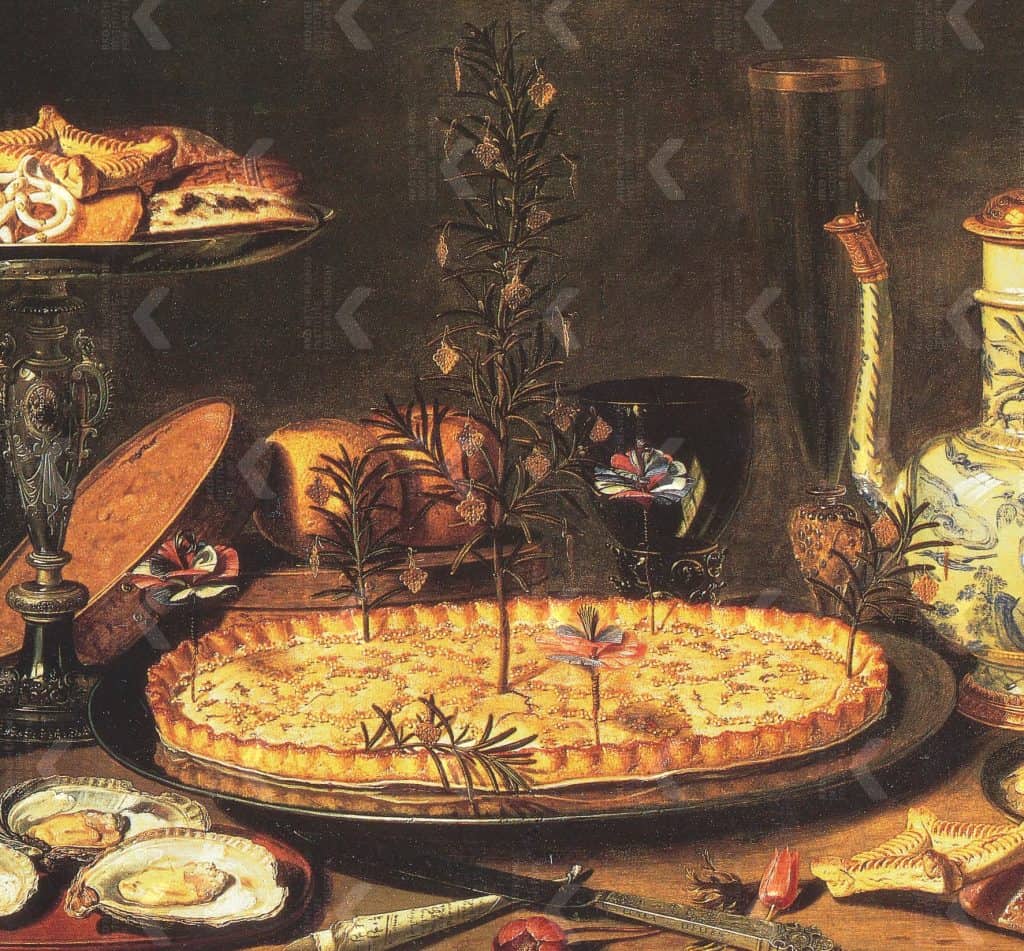 Last but not least, I have found two other anonymous paintings, also made in the Lower Countries during the 17th century, that are quite like the previous one. Look at the silk flowers, for example. 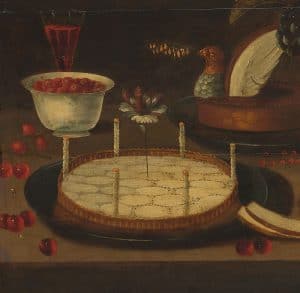 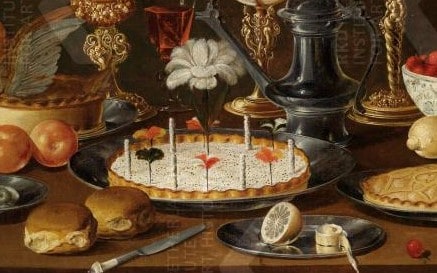 In these two examples little sugar sticks have been used instead of rosemary. In the first painting they even resemble burning candles due to the golden tip. Predecessors of the birthday candles we currently use?

Carrying on with the decorations, we can see that both cakes are covered with icing sugar, already known and used during this period. The first of these two even has a geometric design, like the ones that are made with a template nowadays. Even some kind of granulated decoration is used to finish off these elegant tarts, just like on the one painted by Peeters.

We know that cooks looked at great architects and stage decorations to present their dishes at the table with a spectacular scenery, as if the meal were a theatre play.

These visual examples I have shown you today, bring us much closer to what some of the tarts may have looked like. The ones for the rich and famous at least.

Some other questions however remain unanswered… What did they taste like, were they sweet, savoury, or maybe both? Did the decorations play a particular role and did they have a clear meaning?

I will take a ´bite´ of the tarts and try to answer these questions later on. This includes keeping you informed, of course… 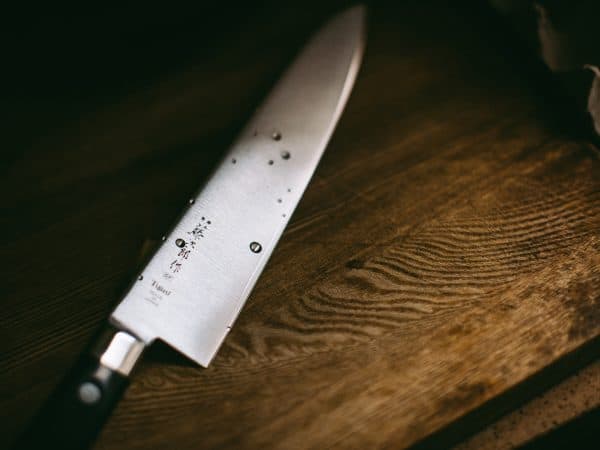 Arte cisoria and mastering the art of the knive 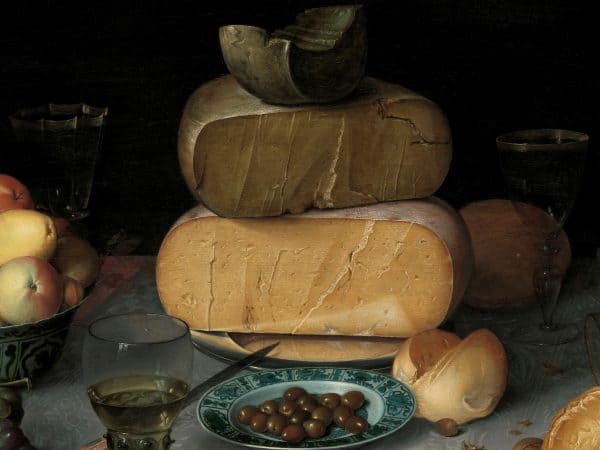